Have you protected your ammo?

If you can afford stock ammo, you owe it to yourself to store it properly.

You should treat your ammunition stockpile like you treat a precious metal.

Both investments that require good practices to maintain for the long haul.

If you don’t properly maintain your ammo, if you neglect it, your ammo’s useful shelf life can be cut short.

Which is a travesty, because ammo will be the lifeblood when SHTF.

Ammo is arguably the most important item you can stockpile.

It’s obvious, but worth saying again, “guns are worthless without ammunition.”

At this point, you’re probably asking this question…

Related post: How To Generate Your Own Electricity At Home

How Much Ammo Do I Need To Store For SHTF 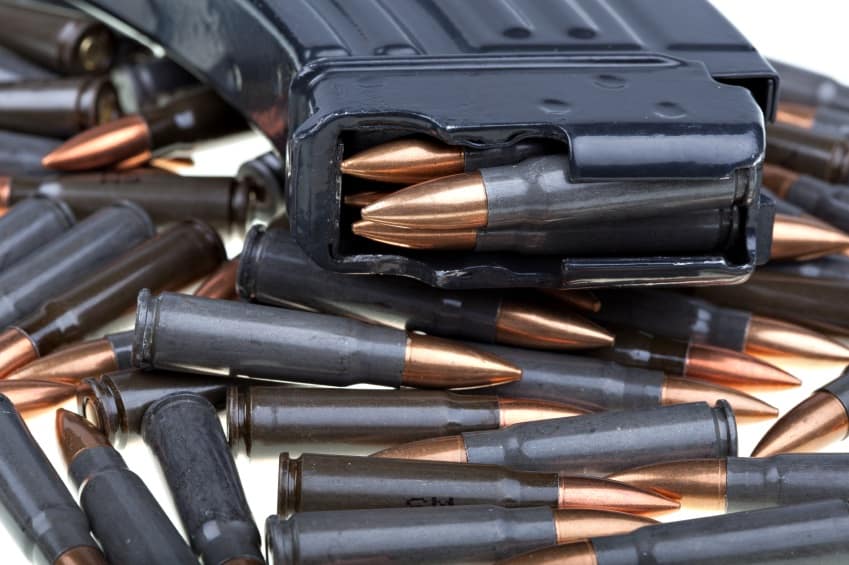 Without the necessary ammo and magazines, a gun is little more than a metal or plastic club.

That’s a minimum of 2,000 rounds that you’ll have to buy over time, and that’s also just for one caliber.

That’s a lot of ammunition, and it doesn’t come cheap.

One strategy to cope with this is to buy a box or two every time you visit a sporting goods store or anywhere that sells ammo; you’ll find that you can increase your ammo count substantially over time.

In short, if you invest your money into two 1,000-round stockpiles of ammo per caliber, one pile to be kept in storage and the other for practice on the range, you’ll be much more proficient (and deadly) with your weapon and you also won’t have to worry about running low in the event of a shortage or a grid-down situation.

By all means, ammunition is a far more valuable investment than fancy upgrades to your gun to make it look cool.

Now that you know how much to store, you probably think to yoursef…

Ammo Storage – How Long Can Ammunition Be Stored

For modern munitions, ammunition shelf life is perfectly sufficient for the average person to keep parcels of ammunition for years, if not decades in all likelihood.

So long as the rounds aren’t subjected to high heat or moisture, nothing is likely to happen.

Most ammo manufacturers advise that their ammunition should be good for ten years.

In reality, it will keep longer.

How many people keep ammunition for a decade or longer, though?

However, the target shooter and concealed carrier is somewhat different than the hunter and outdoorsman. The latter takes to the outdoors and deals with inclement weather, whilst the former might not. In fact, a good deal of self-defense ammo will only be in a magazine or a box.​

A rifle round or shotgun shell for the big game hunter and fowler can get rained on, momentarily submerged and so on.

Water, and more to the point oxygen, has a pesky habit of permeating the molecular bonds of things.

Oxygen is kind of like the guy at parties who randomly inserts himself into conversations; it makes things bad for everyone.

When oxygen happens to iron, you get iron oxides, one of which – red iron oxide – is rust, and that’s just bad.

When it happens to brass or other types of ammunition casing, the result can be rust, corrosion, or at the very least a deactivated primer.

Where Should You Store Ammunition 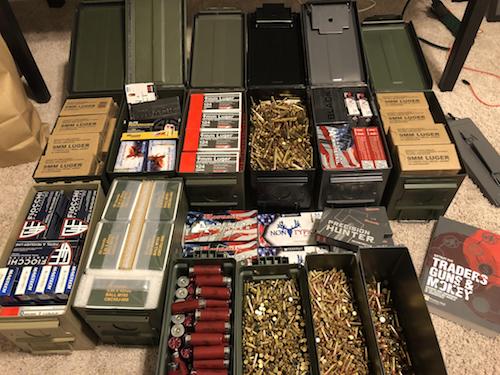 So, how can we protect our investments — what is the best way to store ammo to ensure it goes bang, doesn’t decline in performance and remains safe to shoot?

Here are a few helpful tips.

It takes more than just a warm day to detrimentally impact ammunition — SAAMI believes the breakdown begins around 150 degrees Fahrenheit.

There are very few environments where stored ammo can reach those extremes, but the trunk of a vehicle is one of them.

“Definitely avoid storing ammunition in a car on a hot sunny day- that’s probably the single most likely scenario that could cause problems for the average shooter,” Patterson explained.

“With extremely high temperatures, you get rapid degradation of the ammunition components. The case and bullets are relatively inert in terms of temperature, but the chemical properties of the gunpowder and priming mixture can be affected … Over time, you’ll see a drop in performance, perhaps to the point of going click rather than bang.”

Theoretically, extreme cold could eventually impact ammunition, but it isn’t worth your concern.

Rapid fluctuations could, however, also prove detrimental over time.

So if you’re among the many Americans storing shells in garages, perhaps you should reconsider.

Ensuring a low-humidity environment is another storage priority. According to Patterson, “there’s no hard-and-fast level to strive for, but generally the lower the better.”

If your basement smells damp or occasionally spawns mildew, it’s not ideal for ammo storage.

“One of the biggest issues caused by humidity is corrosion of the brass casing and perhaps even the bullet,” Patterson said. “Number one that changes the dimensions of the case and creates friction, which may not allow the cartridge to seat in the chamber correctly. It could also weaken the cartridge, so take a look at the external conditions of the case- if you see evidence of corrosion, the damage may make the shells unsafe to shoot.”

In cases of very high humidity — or direct exposure to water or household solvents such as oil, ammonia or paint thinner — moisture can seep in and ruin ammo.

Therefore, consider storing your ammunition off the ground in a sealed, plastic container.

Ammo Storage Tip #3 – Keep your Ammo In the Dark

Over long periods of exposure, the sun’s harmful UV rays will break down nearly everything.

You’ve seen this process with vehicles. Leaving a vehicle out in the sun for years will deteriorate the exterior metal and paint.

Now compare that vehicle to one that’s stored in a garage when not in use.

Over long periods of time, UV ray exposure will take a toll on your ammo.

The good news is most indoor storage locations will do just fine.

So a closet, pantry, basement are all protected from UV rays. Plus, the inside of your ammo cans will be dark as well.

So if you store your ammo in a windowless location in ammo cans, UV rays will not cause you any ammo problems.

Ok, so now that you know how you can store your ammo, what about your guns?

Have the power to fight back at your fingterips…

We’ve all been there before…

​The dreaded bump in the night that sends you flying straight up out of bed…You listen carefully and wonder:

“Is there someone in the house?”

​“Will I have enough time to get to my safe and unlock it?”

​Well, I have your solution… The Biometric Gun Safe!

You first need to decide on a cool, dry, dark and safe location.

Put a bit of thought into your ammo storage site based on what we discussed earlier in this article.

The best advice I can provide is where NOT to store your ammo.

Don’t store your ammo in:

Think abour purchasing high-quality ammo cans and put all your ammo into them.

I recommend you dedicate each ammo can to only one caliber size for sound organizational practices.

Then label each ammo can so you know exactly what’s inside without having to open it.

And then start to add fresh desiccants to each ammo can.

Finally you can  create a master schedule and reminders to check your ammo can’s desiccants.

Then just replace and recharge as necessary.

See that wasn’t so hard!

Here’s a short video overview of your ammo storage plan:

And finally, it’s a good idea to keep all your ammo cans stashed away in a large gun safe. That way everything is double secure from intruders, fires, or kids.

You are now on your way to protecting your ammo storage investment the right way.

The way that maintains your precious ammo investment for years, decades, and centuries to come.