"Always Be Ready" Max
I have been writing prepping articles for more than 12 years. I originally started off creating gear review and prepping checklists for other prepping sites until I started my own site 3 years ago. I enjoy helping people worry less and focus on enjoying their lives using my practical prepping advice.
When thinking about survival situations, food is always a priority.

Sure you can hunt, fish, or gather food.  However, having food available for bugging in or bugging out is an even better option.  And it can be a challenge to find something that offers dense calories, vitamins and salt at a low cost.

Before granola bars, massive amounts of preservatives, and fancy packaging, there was hardtack.

Read on to find out how to make hardtack so you have some long lasting survival food no matter how tight your budget may be.

How Long Does Hardtack Last?

Hardtack is basically a dried biscuit that fits the profile of a good survival food.

If kept dry, hardtack can last up to 150 years, so it is ideal for your pack or your food stockpile.  The oldest piece of hardtack in existence is in a museum in Florida and was baked in 1851! There are other specimens from the Civil War.

They are still edible to this day!

What other food could you say that about?

How Does Hardtack Last So Long?

Well hardtack is  made of flour, water, and salt and is cooked until very dry and hard. Moisture is non existent in properly made hardtack.

Adding ingredients beyond the basic recipe can decrease the shelf life of your end product. (More on this later).

Yeast was not used for bread until the age of the Egyptians so if you were eating grains, they were either cooked in dishes or made into unleavened cakes.

This was a good way to put back for hard times such as crop failures.

Because it’s inexpensive to make and lasts so long, it was once taken on long sea voyages and was called things like pilot bread, cabin bread, ship biscuit, sea biscuit, or sea bread.

It was also carried by soldiers on long military campaigns and was referred to as tooth dullers, molar breakers, or sheet iron.

In some ways the settlement of Europeans in the future United States was fueled largely by hardtack which made it possible to travel and explore with some level of food security.

Because it is dried, it is compact and lightweight.  It is also high in calories and carbohydrates.

Those are two commodities that are hard to come by in a survival situation. Another benefit of hardtack is that it is easy to make in almost any conditions.

It was particularly popular among soldiers during the American Civil War, and to this day Civil War reenactors still make and carry hard tack with them.

The beauty of hardtack is that you need very little to make it and you can make as big a batch as your oven will hold.

Here are the supplies needed besides ingredients.

1. Mixing bowl – metal, glass, ceramic anything will do.

2. Dough Docker or something to put holes in your dough.

Before granola bars, massive amounts of preservatives, and fancy packaging, there was hardtack. Read on to find out how to make hardtack so you have some long lasting survival food no matter how tight your budget may be.

How To Make Hardtack

1. Add dry ingredients to your bowl.

2. The amount of water you need can vary a bit. I add a ½ cup at a time and work it in.
3. The end consistency you are going for is just pliable enough to be smooth and worked with a rolling pin.
4. Docking is important because the holes allow steam to escape and your finished product to dry out completely. You can just poke holes in the dough if you don’t have a bread docker.
5.The size of the squares or rounds of hardtack you make is entirely up to you. 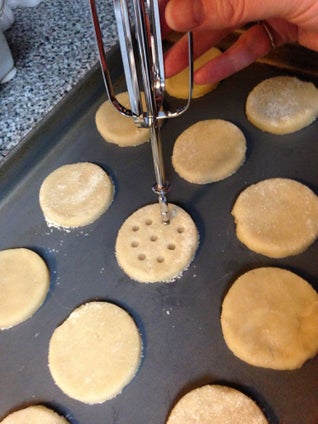 Smaller rounds will dry out faster.

7. The hardtack should be slightly golden brown when done.

8. Leave crackers to cool and allow any residual moisture to evaporate.

Ideally, the hardtack should be just a little brown on each side. Every oven is different and every climate has an effect on baking time, so keep a close eye on them the first time you bake them. You don’t want to burn your first batch.

Adjust the baking time if necessary. Once it’s cool, it should almost be hard as a rock.

Hard tack in this form has very little flavor.  There are things you can do to make the finished product more flavorful.

However, keep in mind that the lack of moisture is what makes hardtack last as long as it does.  You cannot modify the recipe in any way that adds moisture or it will spoil sooner.

Salt is an ingredient that was often added to hardtack. Not only does it add flavor, but the human body needs some level of salt in the diet to keep functioning.  Other grains can be added to the flour for texture and flavor.

Spices can be added or a little honey can give your hardtack a sweet taste while also adding valuable sugars.

Dairy products like butter or cream can be added, but they will likely go rancid within a few weeks.

How To Eat Hardtack

Hardtack was meant to be eaten with some type of liquid. If you have not tried to eat any then you need to realize that they are not kidding when they call it hard.

In the past people used to put it in their jaws and let their saliva soften it until they could swallow. However it is better when it can be soaked in some coffee, broth, soup, or whatever liquid you have to hand.

This is a food that you can actually hurt your teeth or mouth with if you don’t take care when eating it. Beverage or broth is definitely your friend in the world of hardtack.

Hardtack Is A High Source Of Protein

According to Web MD, an adult woman needs 46 grams of protein per day while a man needs 56 grams.

The protein level of your hardtack can easily be adjusted by adding more nutritional yeast.

The amount of salt you use can vary based on your taste.

Remember that in a survival situation salt can be a lot harder to get than you would ever imagine.

While a lot of us try to watch our salt intake, you might actually want to increase it during hard times.

Think about it like this; when you sweat you lose salt and during hard times you might find that you have to do more physical labor and rely on more energy intensive methods for transporting yourself and gear.

Salt was often left out of hardtack in the Civil War because when possible it was paired with high salt foods like salt pork. Cured pork belly and coffee were often paired with hardtack if times were in favor of the soldiers.

Later on in the war soldiers felt lucky if they just had some hardtack to gnaw on.

The (Surprising) Ingredient You Should Add To Your Hardtack Recipe

During a survival situation these are the two vitamin deficiencies that will cause problems the soonest.

Scurvy was a common problem years ago but don’t think it could not happen again. Make sure you have at least some vitamin C powder or capsules put back.

This could be as simple as adding a capsule of Vitamin C to the pouch before you vacuum seal your hardtack.

How to Eat Hardtack

With most recipes there is no need for a section on how to eat the finished product.  However, hardtack is an exception.

The biscuits are so hard that you often have to get creative to find a good way to eat it. As stated before, hardtack can be softened with liquids.  This could be water, coffee, milk, vinegar, or any other liquid.

It is sometimes added to stews or gravy to help thicken the dish.  Some people have been known to soften hard tack and then fry it in grease or oil.

This is one of the tastier preparations of this food.

If you are going to eat hardtack without preparing it in some way, there is a proper way to do it.  Break off a small piece and let it sit in your mouth to soften for a while.

Eventually you will get a softer consistency that you can chew.

Also be sure to have some water on hand as the flour will suck all the moisture out of your mouth.

How To Store Hardtack

There are two primary reasons why hard tack might not last as long as you would like:

During the Civil War, hardtack was commonly infested with weevils and sometimes became wormy.

The reason for this is that although it keeps well, soldiers did not have good storage. Crates of hard tack were exposed to moisture and insects quite often.

During that terrible war, they often ate it anyway because that was all they had.

How Much Hardtack Should You Put back?

If you are on a budget then knowing how to make hardtack is an excellent way to create a cheap stash of food for you and your family.

The more time that passes as a survivalist and prepper, the more I think about things like food preservation.

Whether we are talking about venison, fish, berries, mushrooms, or hardtack, it appears that dehydration is the key to long term preservation.  Keeping food cold is fine in certain circumstances.

However, without electricity there are times that keeping food cold is very difficult.

By removing the moisture from a food, you eliminate the possibility of fungus or bacteria growing in that food.

That is all that hardtack is.  It is a form of bread with all of the moisture removed. In addition to lasting years and years, this survival food is lightweight and versatile.  It is perfect to add to your bug out bag or to save for times when other food is not available.

What do you think of this recipe? Comment Below!