How to build a nice tiny cabin powered by solar panels.

LaMar Alexander came from a farmsteading family and was raised on self-sufficiency. He enjoys gardening and raising animals, as well as being self-sufficient. After college, he tried urban life but was dissatisfied with the 9-to-5 schedule. As a result, at the age of 35, he made a decision to alter his

“I had a wake up call,” he explains, “that made me realize that what I really wanted was a simple homestead cabin and to eliminate my dependence on the system, so I could live sustainably while I pursued my dreams.”

An off-the-grid house that runs on solar and wind power. It took him around $2,000 to construct it. The front steps, front porch, and solar system are not included in the price.

Want to have instant access to more than 50 FREE woodworking plans to help you build your own cabin? Then, this is for you!

Alexander didn’t require a lot of space indoors, but he did need modern conveniences such as a cell phone, Internet connection, electric lights, indoor toilet and shower.

My tiny home is simple to maintain and extremely low-cost to heat and cool, according to Alexander. He has no utility costs because of some solar panels he installed.

“I now have the freedom to pursue my dreams,” he says, “and the money I make stays in my pocket and can be used for vacations or to help my family and for a secure retirement. That is the freedom that an off-grid lifestyle makes possible.”

The whole system is incredibly low-cost, and the best thing is that he has no mortgage.

Lamar Alexander created this charming little 400 square foot cabin for $2000, and it runs on a 570 watt solar and wind power system.

How To Build A Tiny Cabin And Live Off The Grid 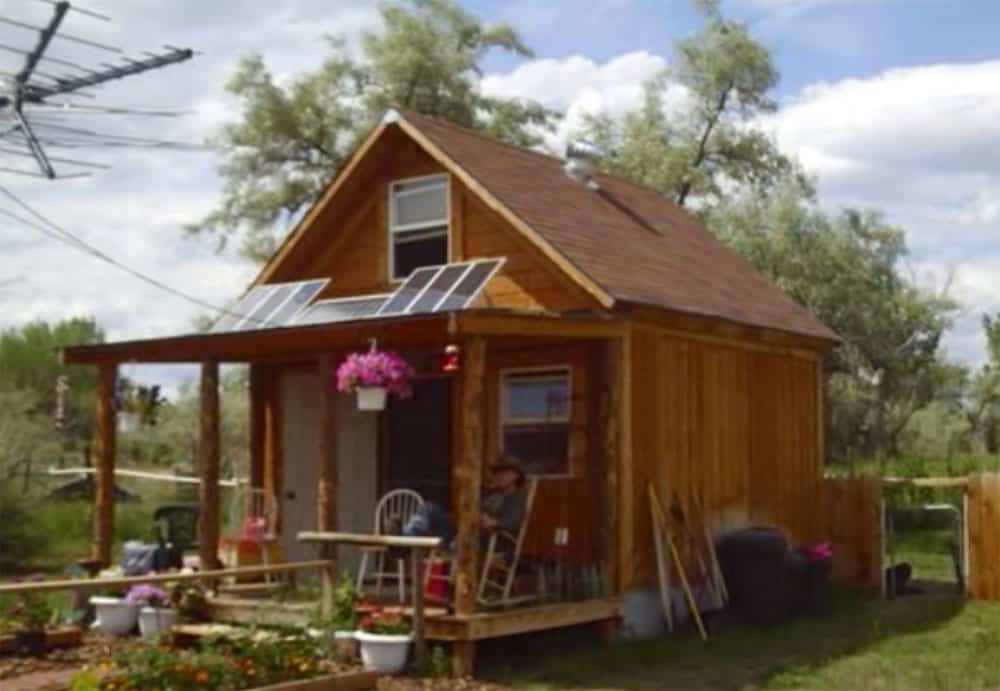 At the corners, Lamar started with concrete deck piers and 2×6 and 2×8 floor joists. The corner posts are 10-foot 4x4s. To keep the cabin warm in the winter, he insulated the floor.

Here’s a sketch of how Lamar designed the roof rafters.

The cabin with the roof rafters up and windows and doors in place. The roof was then covered in particle board and tar paper before shingling.

Want to have more than just this cabin plan? Here are 5 Top DIY Tiny House Plans

His materials came in at just under $2000, not including the door and windows.

This is a great example of a small, sustainable cabin affordable enough for anyone!

Want to learn to learn how to build your own tiny house?  Learn How To Get Started Today!

Building your own house is an amazing experience. Not only do you reap tremendous financial benefits, but you also gain a sense of accomplishment like none other. Learn how to get started today.

Must Have Tools For Preppers

Your Very Own Underground Greenhouse: How to Build

Use Human Urine to Make Fertilizer